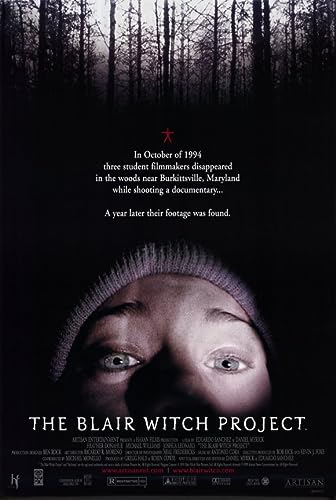 Movie: The Blair Witch Project(1999)[tt0185937] In search of a local legend, three bold amateur documentarians--director, Heather; cameraman, Josh; sound recorder, Mike--hike into Burkittsville's gloomy Black Hills Forest to find a shadow: the fabled Blair Witch. Now, one long year later--after that fateful October of 1994--there's still no sign of the student filmmakers, apart from the raw footage they left behind. Who knows what truly happened during their creepy five-day journey into the mouth of madness? Was there, indeed, an intangible supernatural presence in the dark woods that led to the team's disappearance? Either way, the missing trio must have seen something. Could the nightmarish myth be real? Written byNick Riganas

kylopod on 26 October 2005
One time as I entered a theater the usher was handing out 3D glasses for a short demonstration before the main film. After the previews finished and we were instructed to put the glasses on, there was a brief shot of a virtual theater in 3D, then it ended! Several members of the audience, including me, said in unison, "That was it?"That more or less describes my feelings about "The Blair Witch Project." When it first came out in the summer of '99, a fellow told me that it was the scariest film he'd ever seen. That's what many critics had indicated as well. Since I love being scared, I eagerly went to the theater, thinking I was in for the experience of a lifetime.The movie tells the story of three college kids who do a research assignment, go on a long camping trip into the woods, and ultimately lose their way. As I watched the kids grow increasingly panicky and finally get separated, my interest began to perk...and then the movie just ended! I sat there in confusion. That was it? Where was the fear that everyone spoke about?My complaint is not that the film lacked violence. On the contrary, I'm genuinely tired of the sort of horror film where explicit gore substitutes for true terror. I believe that the most effective horror movies leave a lot to the imagination. Shortly after seeing "The Blair Witch Project," I saw "The Sixth Sense," which scared the pants off me without containing much explicit violence. A movie does not need violence in order to be scary, and, indeed, too much violence can detract from a movie's suspense. But one thing a good horror movie absolutely must do is establish a real threat, something that "The Blair Witch Project" does not do.In the early scenes, I was unable to make sense out of the local legends the kids were investigating. The stories that the residents tell are unconvincing and contradictory. One resident talks about seeing a "white misty thing," another describes what he saw as "an old woman whose feet never touched the ground." This is the kind of naiveté associated with popular folklore like the Loch Ness Monster, and I could not connect any of it with the movie's later events.While we are told that the kids were never found, the footage presents no clear-cut evidence that anything actually happens in the woods, other than that the kids get lost. In one scene, Heather begins screaming frantically at something she finds in a pile of leaves. I later found out that she was supposed to have seen severed human parts, but that was far from clear to me. Fans somehow piece together the various sections of the film and concoct a coherent story of supernatural murder, but to me it looked more like a case of hysteria than an encounter with a Blair Witch.Despite my criticisms, this isn't a bad film. As a fake documentary, it is well-made. The kids look, talk, and act like real college students. While not scary, the film is far from boring. I enjoyed watching the story progress while giving the appearance of being something spontaneous.Curiously, the Razzie awards nominated both this film and Heather Donahue's performance as the worst of 1999, one of the few times I've disagreed with their selections. We tend to overlook how hard it is for actors to act like they're not acting. People who argue that Donahue's performance was over-the-top have never, I suspect, seen someone panic. There was not a moment in the film that felt wrong or fake to me. Perhaps the reason I didn't get scared is that I felt smarter than these characters, who behave in ways that I do not think I would have behaved in the same situation. But I still found their reactions plausible.If I was disappointed, it was only because the hype surrounding this film gave me a certain set of expectations, which failed to solidify. This movie was an early demonstration of the power of the Internet, a cheap $20,000 production that never would have attained so much popularity if not for a website that helped propagate the legend to the public as something real. It was more than just a film: it was an act of showmanship. This all amounted to an interesting demonstration, but not the sort of film I expect will endure.